How To Create Words That Sell

(even when you hate writing, suck at writing or don't know what to write)

The text I received on my phone came from someone half my age, who was just starting their entrepreneurial journey.

And it read “Hey Dave, what’s the one thing you’ve learned that’s made the biggest impact on your business?”.

I loved the question because it was the right question. This person wanted to know what the difference maker was…that one thing that impacts everything else, above all else…instead of wanting my thoughts on the latest flavor of the week in Internet marketing.

And I didn’t even have to think about it. I immediately replied with just two words.

You might think that those two words had something to do with video, or web sites, or anything involving tech.

The two words I replied with were…

Why is copywriting the difference maker? Because the words you choose will have the greatest impact on your bottom line. Period.

Do you run ads? The words you use, in video or text, directly impact your results more than anything else.

Do you send emails? The words you use directly impact your results more than anything else.

Do you have a website? The words on your website, landing pages or any page will directly impact your results more than anything else.

Do you sell products or services? The words you use to sell those will directly impact your results more than anything else.

Get the idea? Good, because here’s the plain truth: you can change the tech that you use, the ad platform you use, your domain, your logo and your branding all you want…but those things will have a marginal effect on your bottom line.

But change the copy you use and the impact to your bottom line can be both instant and staggering. 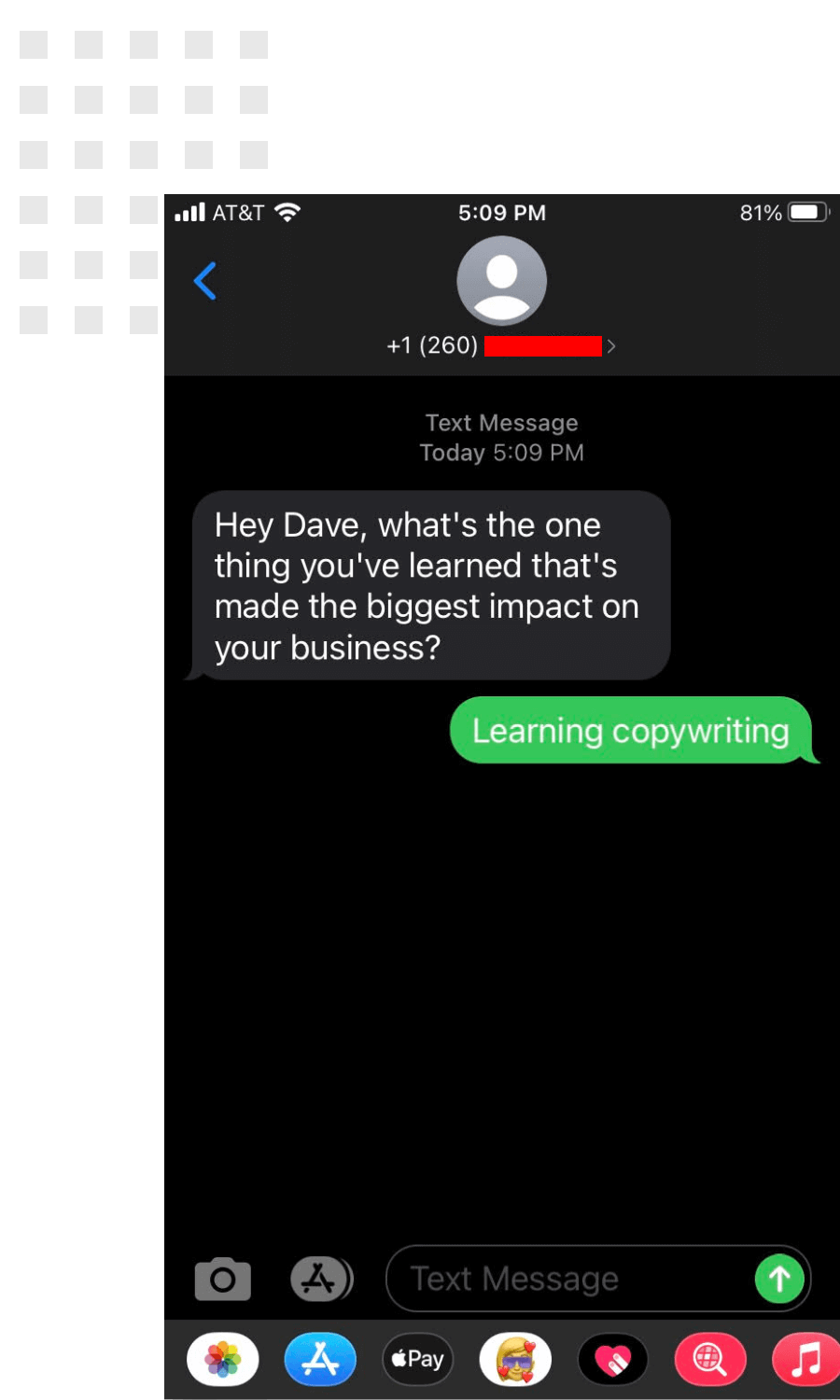 Once upon a time, I considered copywriting to be irrelevant…low on the totem pole of what made a website successful. Instead, I focused on all the shiny pennies…the tools, the software and the sneaky tactics that promised to deliver amazing results.

Except none of those things ever seemed to work. Maybe you’ve discovered this yourself.

At the time, I was selling e-books. And I struggled at it for several years. My best-selling e-book was bringing in about $1,500 every month. Yet no matter what I tried…whatever magic software, tool or underground tactic I purchased…that number always stayed them same.

So out of semi-desperation, I tried the only thing left; changing the words I was using to sell the e-book. I didn’t expect it to make any difference whatsoever. In fact, I was worried it was going to make my sales go down.

I could not have been more wrong. And it became the “ah-ha moment” that changed everything for me online.

That’s because when I changed the copy on the site, sales went from $1,500 a month…to $12,500 a month…in just 30 days. I’m not making that up. Same product, same offer, same branding, same amount of traffic…but 8x’s more sales just by changing words on a page. It’s a lesson I have never and will never forget.

Tech, Trends and Tools Constantly Change, But Words Will Always Sell The Same

And that’s another important lesson.

Back when I was selling e-books, YouTube, smart phones, social media, WordPress and everything else common today didn’t exist. And guess what? It didn’t matter. I used words to sell more e-books than New York Times bestsellers.

When I started Web Video University, cameras still used tapes, smartphones still didn’t exist, MySpace was the social media king and hardly anyone knew about YouTube. It didn’t matter. I used words to sell damn near 8-figures worth of digital courses.

And today we have Tik Tok, Facebook, Twitter, Instagram and apps for everything. Guess what? They don’t matter. They are simply tools that have replaced the tools before them. Tools don’t sell. Words do.

It was words that sold 2,000 years ago. Words that sell today. And words that will forever sell in the future.

Unfortunately, Increasing Your Sales By Changing The Words You Use Can Be a Frustrating Pain In The Ass

You have no clue how to properly do copywriting. Especially copywriting that can double, triple or quadruple your sales (or more).

So you poke around online, not knowing any better that the training you’ll find is either from a dinosaur teaching things that no longer work, or a from new comer with sexy advertising, but who has never actually sold any products of their own – they are just pretenders.

But you settle in on some training anyway, only to find it’s long, full of formulas and acronyms and you spend more time being confused than ever actually learning something you can use.

Yet, you press ahead and decide to re-write your web pages, sales pages, emails and funnels. But you never finish, because you find out that you hate writing copy, suck at writing copy and generally feel like you don’t know what the hell you’re doing.

So you go back to using your existing stuff, with no change in sales, hoping that a shiny penny comes along that magically changes for your fortunes.

So Let Me Save You All That Trouble

Copywriting For People Who Suck at Writing

True confession: I hate writing copy. I’d rather be forced to clean the bathrooms in a public park, on a hot and humid day, without gloves, than write copy.

So when I need to write copy (like what you’re reading now), I make quick work of it.

I do that through my own unique, personal, sometimes-strange copywriting system that I’ve developed over 2 decades. It’s based on getting the best results, with the least amount of effort.

That means cutting out all the bull**** that copywriting courses tell you to do, and instead focusing only on the aspects that actually make a difference. No theory or formulas, but what actually makes sales based on my 20+ years of daily experience doing it.

In Copywriting For People Who Suck at Writing, the title says it all.

If you suck at writing, if you hate writing or if you’ve never written a sales pitch in your life, I’m going to save you all the time and trouble of learning what doesn’t work…by showing you exactly what does work and how to do it.

In the training, I’ll be covering how to write words that sell for everything.

That means ads, video scripts, landing pages, sales pages, emails…you name it. If it’s something that uses words…and…you use to get people to buy your stuff, I’ll be showing you how to use words to dramatically improve your results.

Again, Copywriting For People Who Suck at Writing details my personal copywriting system. I’ve never revealed this before. In the past, I’ve created a couple of copywriting courses that contain one-size-fits-all formulas. This isn’t that – it’s the personal system I use to produce highly effective copy, quickly and painlessly.

No Formulas, No Theories, No Bull****

I recently spent some time looking through all the copywriting training available. Lots of theories. Lots of formulas. And lots of training that is super-expensive and hours and hours long.

It’s all horse****. And all based on the same copywriting principles that have been regurgitated for 100 years.

The world has changed dramatically. What may have worked even a few years ago with copy doesn’t exactly work the same anymore.

How do I know?

Because the system I use and that you’ll learn in Copywriting For People Who Suck at Writing is based on my daily, real-world experience of selling my own stuff.

In other words, it’s based on how I freakin’ feed myself. Not on what worked for a client with a giant budget, what worked once upon a time or what I heard from someone else and then repeated.

The Fastest Way To Double Your Sales or Better, Especially If You Suck at Writing

(plus it's a lucrative skill you'll have for life)

Are you totally stuck when you sit down to write an ad? I’ll not only get your head straight on what actually matters in your ad, but I’ll share with you the only two copywriting approaches to use for ads. And once you know these, writing an ad becomes a piece of cake. You’ll be done in minutes.

Are you clueless what to say when it comes to writing a sales or landing page? I’ll make it simple and painless for you, telling you what to say, where to say it and when to say it – easy peasy. The bottom line:  you’ll learn how to write high-converting sales and landing pages in just a fraction of the time.

Do you spend hours writing email campaigns that gets dismal results? Well, let’s fix that. I’m going to show you how to get your emails opened, read and clicked – using words alone. My email open and click rates are 4x’s higher than “industry standards”. You’ll learn exactly how I do it, so you can do it too.

Are you lost as to why people aren’t clicking your ads, subscribing to your list, opening your emails, buying your stuff or booking appointments with you? Here’s some truth – It’s because people aren’t interested in what you’re offering. How do you make them interested? By changing the words you that you use. Which is exactly the whole point of my training – to make people way more interested in your stuff.

That’s the entire premise of my personal copywriting system…and exactly what I’ll be teaching you inside Copywriting For People Who Suck at Writing.

How to use copy to get the best results, with the least amount of effort. Period.

You’re just trying to sell more of your stuff, for the least amount of effort, by simply changing the words that you use. And hands down, it is the words you use that will have the biggest impact on your bottom line.

If this is something you’d like to learn how to do…and again, I’ve never shared my personal, kind-of-weird copywriting system with anyone before…then sign-up below now.

Copywriting For People Who Suck at Writing is available for instant access right now for just $249.

That means just minutes from now, you can start using the same exact system I use for writing my own copy…including the page you’re on right now.

It’s a small investment that will pay for itself over and over…for life.

And oh…there are no annoying upsells or hoops to jump through…this deal is exactly what I say it is.  Enroll now and you’ll get an instant, unlimited, lifetime access to the training.  No catches and no fine print.

Sound fair to you? Then be sure to sign-up below right now and get started in just minutes from now.

Copywriting For People Who Suck at Writing normally sells for $249. But during my Labor Day Sale, you can get it for just $99.

That means just minutes from now, you can start using the same exact system I use for writing my own copy…including the page you’re on right now.

It’s a small investment that will pay for itself over and over…for life.

And oh…there are no annoying upsells or hoops to jump through…this deal is exactly what I say it is.  Enroll now and you’ll get an instant, unlimited, lifetime access to the training.  No catches and no fine print.

Sound fair to you? Then be sure to sign-up below right now and get started in just minutes from now.