Just about every consumer level HD video camera these days shoots in the AVCHD format.  AVCHD is a highly compressed format that produces video files with a .mts file extension.

Anyone who has tried to edit these files in video editing software has quickly found out that they almost never playback smoothly within the software.  Instead, the playback is very choppy and the audio doesn’t match the video.

As a result, people think something is “wrong” with the video or the camera.  Actually, both are fine.  It’s just that your computer doesn’t have the horsepower to playback your AVCHD video file in real-time.  AVCHD video requires heavy decoding (i.e. a lot of computer resources), more than most computers can handle while simultaneously providing real-time playback.  So you get choppy images and mismatched sound.  Again, the actual video is fine…your computer is just struggling to decode and play it back simultaneously…which can be very annoying while editing.

One solution is to throw more hardware at the problem…a faster, multi-core processor, more memory and a high-end video card.

But a simpler solution is to take the AVCHD footage and convert it to another HD format that is much easier for your computer to handle.  And that format is high-quality MPEG, or .m2t files.

You have a few options in doing this.  One is to place your AVCHD footage in the timeline of your video editing software and render that footage out as a .m2t file.  Then you get rid of your AVCHD file, bring the .m2t file into your video editing software, add it to your timeline and start editing.  In many instances you’ll have the same/similar quality video, but without the playback hassles.

This is very easy to do in Sony Vegas…just add the AVCHD footage to the Vegas timeline and render out using one of the .m2t presets that Vegas provides: 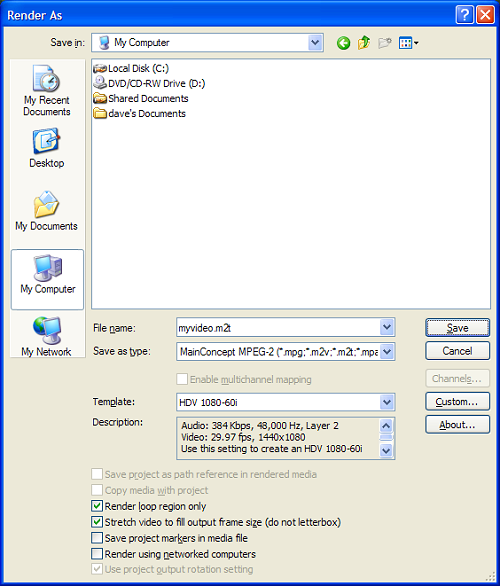 Another option is to use a product called AVCHD Upshift from NewBlueFX.  This is standalone software (Windows only) where you just give it your AVCHD video files, select a preset and it will batch convert everything to .m2t files for you: 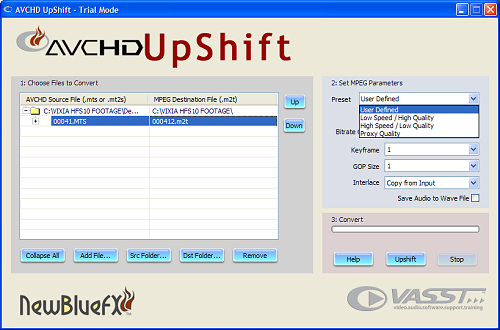 In my tests, AVCHD Upshift converted video files to .m2t anywhere from 2 to 3 times faster than Vegas did.  However, there was a slight change in the coloring of the videos converted by AVCHD Upshift (nothing major, but the difference is noticeable to a good eye).

With that said, if I was forced to choose between AVCHD Upshift and my video editing software (Sony Vegas) to convert AVCHD video to .m2t, I’d choose AVCHD Upshift.  It’s much faster and I can easily take care of any color correction needed while I’m editing the .m2t footage.

A special note to Final Cut (Mac) users. You typically won’t have these AVCHD playback issues because when importing AVCHD footage from your camera, Final Cut will automatically transcode the video (convert it) to the ProRes 422 format…which is a high-quality Apple format that doesn’t have timeline playback issues either.  Your AVCHD videos will take longer to import into Final Cut because of this though.