Anyone who produces web video will sooner or later hear a common complaint from viewers…”your videos keep buffering” or “the audio doesn’t match the video”.

Naturally, to the viewer, they believe the problem is with the video itself.  But that’s rarely the case.  More often than not, the issue is with the speed of the viewer’s Internet connection or the processing power of their computer.

Many things can effect your actual Internet connection speed…and in fact…your speed can vary from minute to minute.

So here’s a basic rundown on how you can determine what your true Internet connection speed is, as well as some tips on improving video playback issues in general.

First, there are several sites on the Internet that let you know what your Internet connection speed is at any moment.  One of the more popular one’s is SpeakEasy (http://www.speakeasy.net/speedtest/).  Simply choose a server from the list and your Internet speed will be tested.

For example, I have a Verizon Fios.  I pay for 20/20 service, which means 20mps download speed and 20mps upload speed.  But am I really getting that speed?  Well, here’s a look at the speedtest results: 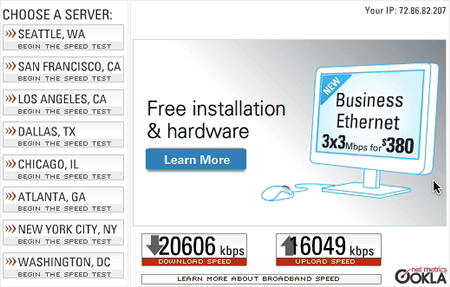 From the results, my download speed is reported as 20,606 kbps…which is 20mps.  So I am getting the download speed as advertised.  But my upload speed is only 16,049 kbps…about 4mb SLOWER than what I’m supposed to have.  And this is common…speed fluctuates.  Later on in the day, I may very well get my full upload speed (and often do).

A couple of key point here though.  First, when I had Fios installed, I did not have these speeds.  In fact, these speeds were just about cut in half.  I had to do some “tweaking” on all of my computers to achieve the top speeds (your Internet service provider should provide instructions or software that will do this “tweaking” for you).  But the point is, most people don’t even realize that they can dramatically increase their Internet speed by doing these tweaks.

For example, I ran another speedtest, from the same computer, but this time I unplugged my cable and used a wireless connection instead.  Here are the results: 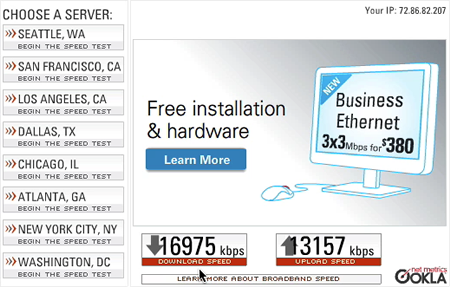 You can see that both my download and upload speeds dropped by 3mps.  While that might not seem like much on an very fast 20mps connection, if for example you have a 6mps connection (a fairly typical broadband speed in the U.S.), you are cutting your speed in half by going wireless.

People also have the misconception that when you visit a web site, you’re taking a straight path from your computer to that web site.  In reality, you’re bouncing all over the place, traveling thousands of miles, before you actually hit that web site.

These are know as hops…and you typically travel through 15 or so different hops before landing on a web site.  For example, I used a visual “trace route” tool to show what actually happens when I start from my computer in Indiana and go to Google, whose servers are in California.  For this, I used this tool: http://cqcounter.com/traceroute/.  Here are the results: 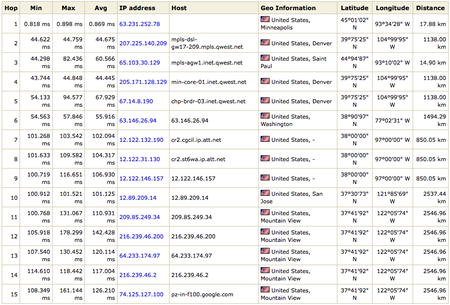 Because the above image is reduced, you can’t see it perfectly, but I went from Indiana to Minnesota to Denver to Washington DC to California.  Here’s a map of how I bounced around before reaching Google: 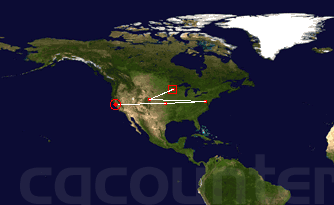 And here’s the rub.  If there are any connection issues…at any of the 15 different hops I passed through along the way (or on any of the lines along the way), Google will appear “slow to load” to me.  And I’ll blame Google, when it’s actually something completely beyond their control.  In fact, someone else visiting Google, going through a completely different set of hops, will experience no issues with Google at all.

But web video is a unique animal.  Not only does it require the viewer to have a fast Internet connection, but it also uses the processor on the viewer’s computer to simultaneously decode and playback the video.  So if you have an older computer, you may experience playback issues simply because your computer is straining to play the resource-intensive web video.

Even then, people with newer processors and plenty of memory can experience playback issues.  And more often than not, this is because they are running multiple applications on their computer…while trying to watch web video at the same time.  It typically looks like this: 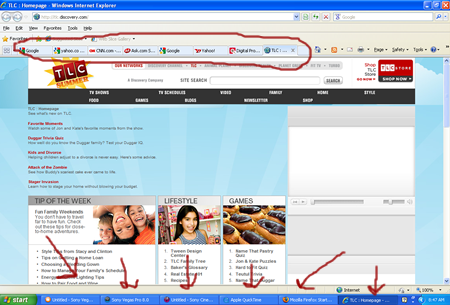 Worse yet, in their browser, they have multiple tabs open (red circle around all the browser tabs).  Again, this is draining system resources.

Combined, or even by themselves, this multi-tasking will likely lead to playback issues for videos the person is trying to watch online.  Especially if those videos are encoded with the H.264 codec, which is the so-called “high-definition” format on the web. This codec is becoming widely used for many high-quality videos on the Internet (including most of my own videos)…and it requires a lot of horsepower from your computer (i.e. processor, memory and graphics card).

The solution? When playing web video, particularly high-quality web video, close any open applications you have and use only one browser window.  You computer will thank you for it…and your odds of experiencing playback issues will decrease.

So there you go.  While there are other issues that can cause web video playback issues, these are the most common ones.  And with just a few small changes on your part, you can actually reduce or eliminate these issues entirely.

Remember, web video is a big bandwidth and computer resource hog.  It’s a complex animal that your computer has to download and decode…all at the same time.  So give it a little leeway, a little extra bandwidth and a little extra processing power where you can, and you’ll experience fewer frustrations.